Engaging the Will in Personal Transformation

Notes for a presentation given at the Alumni Reunion of the Psychological Studies Institute, Atlanta, GA, November 7, 2008.

Human beings have a vital interest in the direction of human development. It often is focused upon dysfunctionality and its remediation, but can also be directed toward the positive development of persons and their flourishing—or on both. Any understanding of human development will turn upon assumptions about the essential dimensions (‘parts’) of the human being, and mistakes concerning those dimensions will undermine efforts at modifications of human life in desired directions. From the beginning of human efforts to deal with the dynamics of the human self, more or less sketchy and systematic inventories of its essential factors in the processes of human life have been drawn up. Most notably, in the ancient world, in the Bible and in Classical writers such as Plato and Aristotle. Early Christian thinkers, such as Tertullian, tried to respond to the Classical writers with “new and improved” inventories drawn from Biblical sources and their understanding of the spiritual life.

One of the primary problems in gaining an appropriate understanding of human personality and especially its “spiritual” dimension has been to locate the will—the human capacity for choice—in the economy of life. This is especially troubling since, from a “common sense” approach to living, it is clear that any life that is wholesome and really desirable has to run from the “inside.” It has to be a life that is chosen and prudent. Thus the Proverb says: “Like a city that is broken into and without walls is a man who has no control over his spirit.” (25:28) One has to be able to choose what is good and to carry through with the choice. The individual as well as those who would help him must be able to contribute to the development of a steady, well-directed will or heart. “Those with a well-kept heart are persons who are prepared for and capable of responding to the situations of life in ways that are good and right. Their will functions as it should, to choose what is good and avoid what is evil, and the other components of their nature cooperate to that end. They need not be ‘perfect’; but what all people manage in at least a few times and areas of life, they manage in life as a whole.” (p. 29 of Renovation of the Heart)

In Plato’s Republic, and in other of his writings, the human being or the soul is divided into three parts, in terms of what Plato takes to be the three dynamic principles or sources of action: Reason, Emotion, and Desire. Reason is the capacity to discern what is the case and what is good. Famously, Socrates held that if we knew the good, we would do it. Emotions such as honor and shame would side with Reason to force Desire to yield to the dictates of Reason and conform to what is good and right. Of course that would all depend upon the Emotions and Reason being properly trained, and that would in turn require proper laws enforcing an adequate training or education. Both Plato and Aristotle thought that wholesome direction of life was the result of having a proper mental grip on truth and goodness. There was no place in their system of the self for the will to take direction of life and train for the guidance of the person in terms of what is right and good. The system of the self as they saw it was a mere play of forces, with no intelligent and effectual control. The disasters of Greek life developed into what the Classicist Gilbert Murray called the “failure of nerve” of Greek Civilization and that resulted in the retreat from hopefulness about the human condition into the defensive positions of Stoicism and Epicureanism, encountered by the Christian movement as it spread.

There is indeed a “Christian” system of human personality, and we shall come to it shortly. But we first turn from Plato to Freud, who also had a three-part system of the human self: the id, the ego, and the super-ego. Like Plato, each of these elements were thought of as dynamic sources of life and action, and it was proposed that something useful could be done to affect their character and interactions: Psychoanalysis. Like Plato, the will as a separate capacity of self-determination simply does not show up in Freud. For him, the self is a field of play of “forces,” and there were (hopefully) ways in which knowledgeable people could intervene in that play to modify certain outcomes. (Exactly how that worked has never, I believe, been clearly demonstrated.) But it was a deterministic system largely under the control of what lay below conscious efforts and beyond choice. Any effectual response to the cry of Paul—“The good that I would, I do not; but the evil which I would not, that I do” (Rom. 7:19)—lay beyond all conscious direction that I might take of my life. My only hope was to find some effectual technologist of the sub- or unconscious mind. Perhaps most importantly, I could not have recourse to conscious moral or spiritual guidance as a conscious plan for life.

It is interesting to observe, for a moment, that brain science and psycho-pharmacology also, when taken by themselves, by-pass the will, which does not mean that they have no good use. No doubt they do. Also, we do not mean to suggest that there is no sub-conscious mind or that it cannot be worked with in appropriate ways. My concern here is simply to emphasize that there is a necessary engagement of the will in personal and spiritual development and that (with very few exceptions) this is omitted from many of the most well-known systems of the human self. We have to wonder how those systems could be adequate for the understanding and direction of the human, and especially the spiritual life.

What might be called a descriptive, non-theoretical view of the essential dimensions of human personality develops within Biblical writings and culminates in the teachings of Jesus. It is expressed in Jesus’ words from Mark 12:29-31, “Hear, O Israel! The Lord our God is one Lord; and you shall love the Lord your God with all you heart and with all your soul, and with all your mind, and with all your strength…<and> You shall love your neighbor as yourself.” Try to forget, for the moment, all the anti-intellectualism associated with the Bible and religion and just regard these words as coming from a very intelligent man standing in what is one of the most enlightened cultural traditions known on earth. Let us look carefully at these dimensions and comment on them using the following diagram. 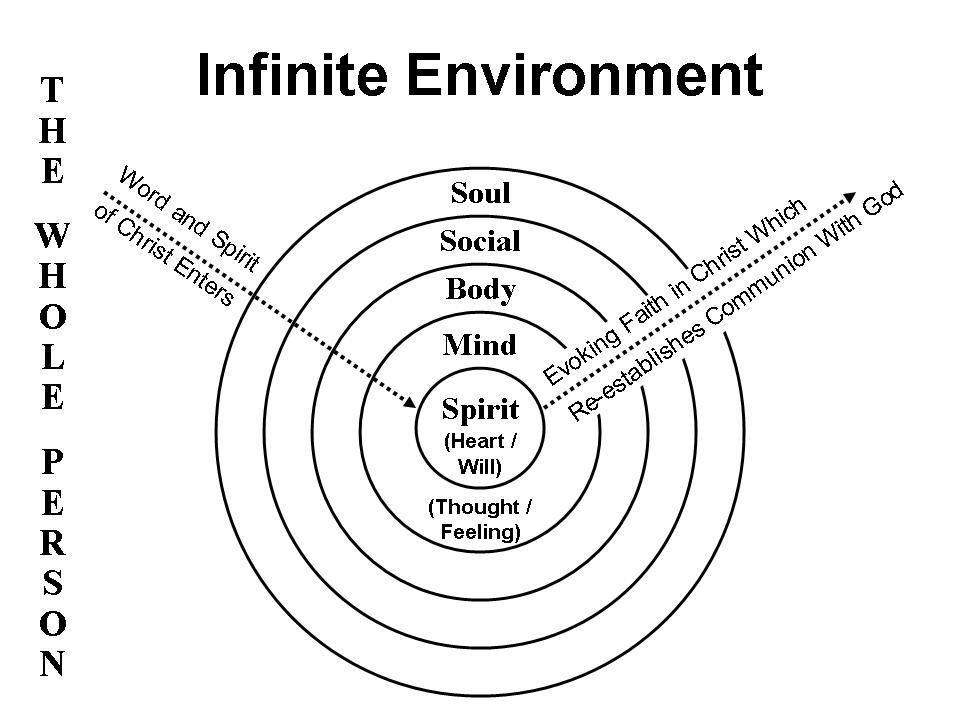 Spiritual transformation only happens as each essential dimension of the human being is transformed to Christlikeness under the direction of a regenerate will interacting with constant overtures of grace from God. Such transformation is not the result of mere human effort and cannot be accomplished by putting pressure on the will (heart, spirit) alone.

Please consider partnering with Dallas Willard Ministries to provide additional resources like these to help people live more fully in the Kingdom of God here and now. DWM is a 501(c)(3) organization, and all contributions are tax deductible. Thank you!