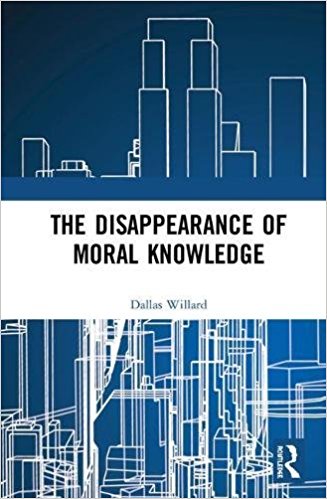 View abstracts of each chapter on the publisher’s website.

Please visit our Moral Knowledge Initiative section to learn about the next steps to follow the book’s publication.

A description of the book in Dr. Willard’s own words:

This book deals with the disappearance of morality from the accepted fields of knowledge over the last one hundred years. Thus it deals with a historical and social phenomenon, but one that is substantially philosophical. Accordingly, it is mainly devoted to Nineteenth and Twentieth Century changes in the philosophical understanding of knowledge and of morality, as these have developed in and around the universities and have influenced the self-understanding and social orientation of the institutions of knowledge in Western culture.

To say that moral knowledge has disappeared is not to say that it does not exist, nor to claim that no one has any moral knowledge. To be sure, such claims are a part of the story. But it is to say that knowledge of the moral life and of its conduct is not routinely available, to individuals or groups, from the social institutions long thought to be responsible for it or from other sources.

The moral life itself, with its beliefs, sentiments, traditions, attacks and counter-attacks, is running at full force. If anything, it is more volatile—more dangerous, perhaps—than ever, though it is often mislabeled “political.” This volatility may be in part due to the fact that it is no longer regarded as an area where we are responsible to knowledge. Whether or not an arena of life is regarded as a domain of knowledge makes, as we shall see, a huge difference with respect to our conduct in it. To be without routinely available knowledge with respect to what is good and evil, right and wrong, obligatory or morally admirable or not, might easily be seen as a sweeping social and personal disaster, or the cause of such, when coolly viewed from a rational perspective. But we now are accustomed to the lack and do not see how most of the evils we deplore in the contemporary world might be rooted in it.

The book concludes with some reflections on what our life together and our individual existence might look like if they were guided by publicly accessible knowledge of moral distinctions based upon (though extending beyond) the claims of face to face presence of human beings to one another.

To learn more, we invite you to read Dr. Willard’s Preface, visit the publisher’s website to read abstracts of each chapter, and watch Dr. Willard’s 2010 lecture below on “Moral Knowledge: The Thoughts and Intents of the Heart” for a good overview of this topic:

Edited and Completed by:

Steven L. Porter is Professor of Theology and Philosophy at Biola University. He earned his Ph.D. in Philosophy from USC in 2003 under the direction of Dallas Willard. His previous publications include Restoring the Foundations of Epistemic Justification: A Direct Realist and Conceptualist Theory of Foundationalism and Neuroscience and the Soul: The Human Person in Philosophy, Science, and Theology .

Gregg A. Ten Elshof is Professor of Philosophy at Biola University. He earned his Ph.D. in Philosophy from USC in 2000 under the direction of Dallas Willard. His previous publications include Introspection Vindicated, I Told Me So , and Confucius for Christians.

Please Note: These three philosophy professors were doctoral students working with Dr. Willard during the beginning years of his work on this book. They all stayed in close contact with him after graduating from USC, and have had many discussions with him about the disappearance of moral knowledge. Just before Dallas’s passing, they extended an offer to help him complete the book and he responded, “Now, THEY could do it!”

The editors’ work on chapters 6-8 was guided by Prof. Willard’s own plans for those chapters, insofar as they were known, and their contributions are clearly distinguished from Prof. Willard’s through the use of boldface type. The editors explain how they went about their work beginning on p. xv of their Introduction.

The high price of this volume reflects the fact that it is a high-quality, hardback edition intended for use in University libraries. This is now standard practice in academic publishing, which operates quite differently from non-academic publishing. A more affordable paperback edition will be available in the Spring of 2020.

The Disappearance of Moral Knowledge by the late Professor Willard is a major contribution to the history of twentieth century analytic ethics as well as an incisive analysis of the possibility of moral knowledge. Porter et al. have done magnificent editorial work and have facilitated an invaluable contribution to the literature. This book surely will stand out as one of the most important contributions to the epistemology of ethics.

Reviewed by Chad Bogosian for the Winter 2019 issue of Philosophia Christi, February 2020.
- “Recovering Our Knowledge Of The Good Person: A Review Essay of Dallas Willard’s The Disappearance of Moral Knowledge”

Response by R. Scott Smith for the Evangelical Philosophical Society, November 2019.
- A Spiritual Issue with the ‘Disappearance of Moral Knowledge’
NOTE: This link will take you to a blog post by Dr. Smith that provides a link to his essay as well as an opportunity for you to post your comments.

3. G. E. Moore : From Science of Ethics to Nihilism

4. Emotivism : The Erasure of Moral Knowledge

6. A Consensus of Rational People : Social Constructionism in Rawls

8. Prospects for a Return of Moral Knowledge