Early Writings in the Philosophy of Logic and Mathematics 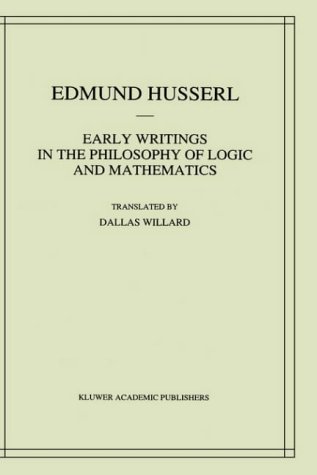 Available in hardcover and paperback from Amazon.com and Barnes & Noble.

Translated and edited by Dallas Willard (University of Southern California)

This books gives the English reader access to nearly all of the shorter philosophical texts (published or unpublished) produced by Edmund Husserl between the appearance of his first book, Philosophie der Arithmetik, and that of his second book, Logische Untersuchungen - roughly, from 1890 through 1901. Along with these texts we have included a number of unpublished manuscripts from the same period and dealing with the same or closely related topics. A few of the texts here translated (the review of Pahigyi, the five “report” articles of 1903-1904, the “notes” in Lalande’s Vocabulaire, and the brief discussion. article on Marty of 1910) obviously fall outside this time period, so far as their publication dates are concerned; but in content they seem clearly confined to it. The final piece translated, a set of personal notes that date from 1906 through 1908, provides insight into how Husserl experienced his early labors and their results, and into how he saw their relation to work before him: a phenomenological critique of reason in all of its forms. Thus the texts here translated - which obviously are to be read in conjunction with his first two books - cover the progression of Husserl’s Problematik from the relatively narrow one of clarifying the epistemic structure of general arithmetic, to the all-encompassing one of establishing in principle, through phenomenological research, the line between legitimate and illegitimate claims to know or to be rational, regardless of the domain concerned.

“... prepared in close collaboration with the Husserl Archive in Louvain. It is well designed, and there is no question about the scholarly value of this translation. Moreover, the book should serve as an excellent entrance point into Husserl’s philosophy of mathematics...”

Editorial and Customer Reviews on Amazon.com