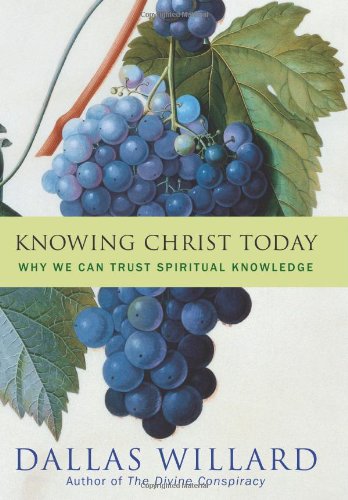 Also available in Chinese, Korean, Portuguese, and in the U.K.

A Powerful, Thought-Provoking Guide to Living the Life Jesus Intends for Us

This book deals with the disastrous effects of divorcing the teachings of Jesus Christ and his people from the domain of human knowledge. Its aim is to reposition the substantial teachings of Christianity (“Mere” Christianity) as a body of knowledge in the contemporary world. In the process it explains what knowledge is, as compared to belief, commitment and profession, and clarifies the difference it makes whether or not an area of thought and practice is regarded as an area of knowledge. Then it proceeds to deal with some of the most basic points of Christian teaching from the viewpoint of knowledge.

It is Dr. Willard’s hope that this book will put those who practice Christian discipleship in a different and much stronger position, and that it will be helpful for all areas of education, but especially for Christian schools, colleges and universities.

From the Preface: I should alert the reader to the fact that this is not a devotional book, and that it will require considerable mental effort to understand. This lies in the nature of the problems to be dealt with. I have tried to ease the pain as much as possible. One effect of the displacement of faith from knowledge, which we are dealing with in this book, is that many people now believe you do not need to think deeply and carefully to follow Christ. C. S. Lewis has a very penetrating comment to make about this matter:

“God has room for people with very little sense, but He wants every one to use what sense they have. The proper motto is not ‘Be good, sweet maid, and let who can be clever,’ but ‘Be good, sweet maid, and don’t forget that this involves being as clever as you can.’ God is no fonder of intellectual slackers than of any other slackers. If you are thinking of becoming a Christian, I warn you you are embarking on something which is going to take the whole of you, brains and all…. One reason why it needs no special education to be a Christian is that Christianity is an education itself.” (From Mere Christianity)

In prose that is both decisive and austere, Willard (The Spirit of the Disciplines) throws down the gauntlet to those in both the secular and religious realms who claim it is impossible to know Christian truths. A professor at the University of Southern California’s School of Philosophy, Willard attempts to demonstrate how knowledge and faith can support each other. Arguing that the “standard of knowledge is truth and proper evidence,” the writer leads readers through his proofs for the existence of God, the resurrection of Jesus, God’s ongoing intervention in the world and the then logical possibility of a vital spiritual practice centered on “interactive life with Christ.” Christian discipleship, as the author sees it, includes such crucial elements as humility, intent to be inwardly transformed, the practice of the presence of Christ and obedience. As Willard admits in his introduction, the book is a mental workout—even the questions at the end of the chapters are challenging. Woven through with the ideas of classical and contemporary philosophers, theologians and sociologists, this volume will engage readers who are willing to follow Willard on his self-assured way, and trust him as a guide.

Willard’s presentation is compelling and profound. He claims we can know for sure that God exists and that miracles happen. He proves it with logic and history, distinguishing real, trustworthy knowledge from mere faith and commitment. Each chapter addresses basic questions like, “What is real?” “Who is good? and “How does one become good?” Willard offers his work for “serious and thoughtful readers,” Christians or not. Knowing Christ Today reads like lecture notes in a college class on philosophy of religion, but is well worth the effort. Each chapter ends with helpful discussion questions.

How refreshing to discover in Knowing Christ Today a contemporary book that demands careful thinking on the part of the reader. As a distinguished professor of philosophy for many years Dr. Dallas Willard possesses a keen understanding of the value and reality of knowledge. In “The Knowledge of Faith” he focuses this understanding like a laser beam to the issue of moral knowledge as a legitimate source for understanding reality and applying it to daily life. “The Knowledge of Faith” may not be an easy read, but it is a must read. It is for your life.

This is clear, lucid thinking about what matters most, as is desperately needed today. Only Dallas Willard could have written this, but I don’t know anyone who doesn’t need to read it.

A spiritual defense of the proposition that faith and reason are not contradictory.

Reviewed by Brandon Vogt on Disqus.