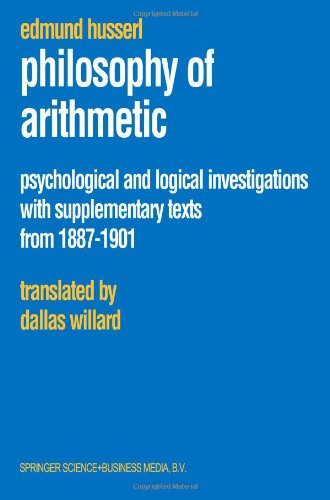 In his first book, Philosophy of Arithmetic, Edmund Husserl provides a carefully worked out account of number as a categorial or formal feature of the objective world, and of arithmetic as a symbolic technique for mastering the infinite field of numbers for knowledge. It is a realist account of numbers and number relations that interweaves them into the basic structure of the universe and into our knowledge of reality. It provides an answer to the question of how arithmetic applies to reality, and gives an account of how, in general, formalized systems of symbols work in providing access to the world. The “appendices” to this book provide some of Husserl’s subsequent discussions of how formalisms work, involving David Hilbert’s program of completeness for arithmetic. “Completeness” is integrated into Husserl’s own problematic of the “imaginary”, and allows him to move beyond the analysis of “representations” in his understanding of the logic of mathematics.

Husserl’s work here provides an alternative model of what “conceptual analysis” should be - minus the “linguistic turn”, but inclusive of language and linguistic meaning. In the process, he provides case after case of “Phenomenological Analysis” - fortunately unencumbered by that title - of the convincing type that made Husserl’s life and thought a fountainhead of much of the most important philosophical work of the twentieth Century in Europe. Many Husserlian themes to be developed at length in later writings first emerge here: Abstraction, internal time consciousness, polythetic acts, acts of higher order (‘founded’ acts), Gestalt qualities and their role in knowledge, formalization (as opposed to generalization), essence analysis, and so forth.

This volume is a window on a period of rich and illuminating philosophical activity that has been rendered generally inaccessible by the supposed “revolution” attributed to “Analytic Philosophy” so-called. Careful exposition and critique is given to every serious alternative account of number and number relations available at the time. Husserl’s extensive and trenchant criticisms of Gottlob Frege’s theory of number and arithmetic reach far beyond those most commonly referred to in the literature on their views.

“This translation is the crowning achievement of Dallas Willard’s monumental research into Husserl’s early philosophy … . The volume is hence a good starting point for English-speaking students from freshman to graduate level who wish to familiarise themselves with Husserl’s philosophy of mathematics … . Willard succeeds in creating a very readable English text, maintaining a good balance between correctly rendering difficult and ambiguous German terms and writing in a clear and easy way.”